This post introduces the concept of durable execution, which is used by Stripe, Netflix, Coinbase, Snap, and many others to solve a wide range of problems in distributed systems. Then it shows how simple it is to write durable code using Temporal's TypeScript/JavaScript SDK.

When building a request-response monolith backed by a single database that supports transactions, we don’t have many distributed systems concerns. We can have simple failure modes and easily maintain accurate state:

As soon as we introduce a second place for state to live, whether that’s a service with its own database or an external API, handling failures and maintaining consistency (accuracy across all data stores) gets significantly more complex. For example, if our server has to charge a credit card and also update the database, we can no longer write simple code like:

If the first step (charging the card) succeeds, but the second step (adding the order to the database) fails, then the system ends up in an inconsistent state; we charged their card, but there’s no record of it in our database. To try to maintain consistency, we might have the second step retry until we can reach the database. However, it’s also possible that the process running our code will fail, in which case we’ll have no knowledge that the first step took place. To fix this, we need to do three things:

That, along with persisting retry state and adding timeouts for each step, is a lot of code to write, and it’s easy to miss certain edge cases or failure modes (see the full, scalable architecture). We could build things faster and more reliably if we didn’t have to write and debug all that code. And we don’t have to, because we can use durable execution.

Durable execution systems run our code in a way that persists each step the code takes. If the process or container running the code dies, the code automatically continues running in another process with all state intact, including call stack and local variables.

Durable execution ensures that the code is executed to completion, no matter how reliable the hardware or how long downstream services are offline. Retries and timeouts are performed automatically, and resources are freed up when the code isn’t doing anything (for example while waiting on a sleep(‘1 month’) statement).

Durable execution makes it trivial or unnecessary to implement distributed systems patterns like event-driven architecture, task queues, sagas, circuit breakers, and transactional outboxes. It’s programming on a higher level of abstraction, where you don’t have to be concerned about transient failures like server crashes or network issues. It opens up new possibilities like:

Some examples of durable execution systems are Azure Durable Functions, Amazon SWF, Uber Cadence, Infinitic, and Temporal (where I work). At the risk of being less than perfectly objective, I think Temporal is the best of these options 😊.

Now that we’ve gone over consistency in distributed systems and what durable execution is, let’s look at a practical example. I built this food delivery app to show what durable code looks like and what problems it solves: 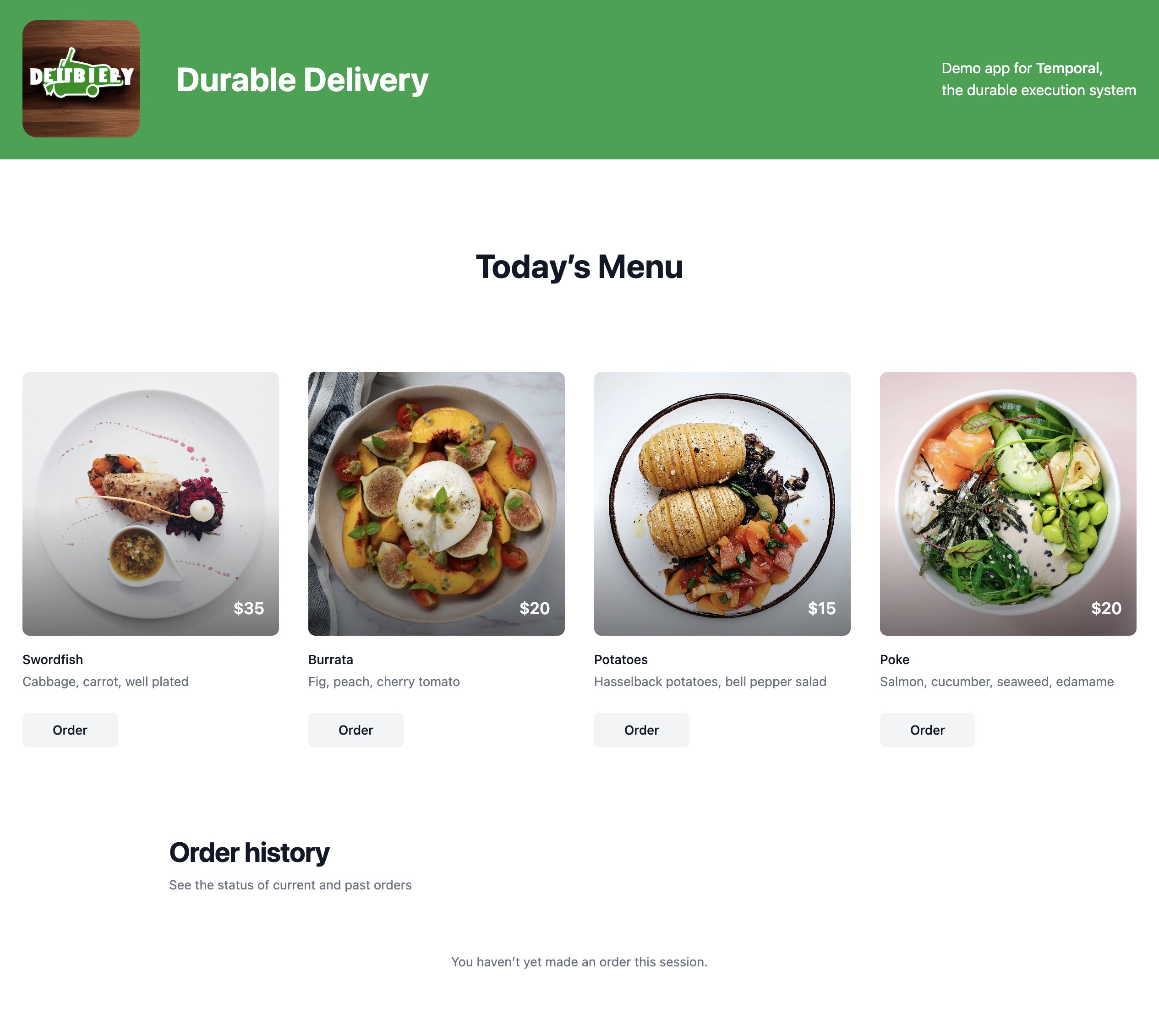 Don’t blame me for the logo—that’s just what Stable Diffusion gives you when you ask it for a durable delivery app logo. 🤷‍♂️😄

The app has four main pieces of functionality:

When we order an item from the menu, it appears in the delivery driver site (drive.temporal.menu), and the driver can mark the order as picked up, and then as delivered.

All of this functionality can be implemented in a single function of durable JavaScript or TypeScript. We’ll be using the latter—I recommend TypeScript and our library is named the TypeScript SDK, but it’s published to npm as JavaScript and can be used in any Node.js project.

Let’s take a look at the code for this app. We’ll see a few API routes but mostly go over each piece of the single durable function named order. If you’d like to run the app or view the code on your machine, this will download and set up the project:

When the user clicks the order button, the React frontend calls the createOrder mutation defined by the tRPC backend. The createOrder API route handler creates the order by starting a durable order function. Durable functions—called Workflows—are started using a Client instance from @temporalio/client, which has been added to the tRPC context under ctx.temporal. The route handler receives a validated input (an object with a productId number and orderId string) and it calls ctx.temporal.workflow.start to start an order Workflow, providing input.productId as an argument:

The order function starts out validating the input, setting up the initial state, and charging the customer:

Any functions that might fail are automatically retried. In this case, chargeCustomer and sendPushNotification both talk to services that might be down at the moment or might return transient error messages like “Temporarily unavailable.” Temporal will automatically retry running these functions (by default indefinitely with exponential backoff, but that’s configurable). The functions can also throw non-retryable errors like “Card declined,” in which case they won’t be retried. Instead, the error will be thrown out of chargeCustomer(product) and caught by the catch block; the customer receives a notification that their payment method failed, and we throw an ApplicationFailure to fail the order Workflow.

The next bit of code requires some background: Normal functions can’t run for a long time, because they’ll take up resources while they’re waiting for things to happen, and at some point they’ll die when we deploy new code and the old containers get shut down. Durable functions can run for an arbitrary length of time for two reasons:

So although some durable functions run for a short period of time—like a successful money transfer function—some run longer—like our order function, which ends when the order is delivered, and a customer function that lasts for the lifetime of the customer.

It’s useful to be able to interact with long-running functions, so Temporal provides what we call Signals for sending data into the function and Queries for getting data out of the function. The driver site shows the status of each order by sending Queries to the order functions through this API route:

When the order function receives the getStatusQuery, the function passed to setHandler is called, which returns the values of local variables. After the call to chargeCustomer succeeds, the state is changed to ’Paid’, and the driver site, which has been polling getStatusQuery, gets the updated state. It displays the “Pick up” button.

Picking up an order

When the driver taps the button to mark the order as picked up, the site sends a pickUp mutation to the API server, which sends a pickedUpSignal to the order function:

The order function handles the Signal by updating the state:

Meanwhile, further down in the function, after the customer was charged, the function has been waiting for the pickup to happen:

await condition(() => state === 'Picked up', '1 min') waits for up to 1 minute for the state to change to Picked up. If a minute goes by without it changing, it returns false, and we refund the customer. (Either we have very high standards for the speed of our chefs and delivery drivers, or we want the users of a demo app to be able to see all the failure modes 😄.)

Similarly, there’s a deliveredSignal sent by the “Deliver” button, and if the driver doesn’t complete delivery within a minute of pickup, the customer is refunded.

If delivery was successful, the function waits for a minute for the customer to eat their meal and asks them to rate their experience.

After the final push notification, the order function’s execution ends, and the Workflow Execution completes successfully. Even though the function has completed, we can still send Queries, since Temporal has the final state of the function saved. And we can test that by refreshing the page a minute after an order has been delivered: the getStatusQuery still works and “Delivered” is shown as the status:

We’ve seen how a multi-step order flow can be implemented with a single durable function. The function is guaranteed to complete in the presence of failures, including:

This addressed a number of distributed systems concerns for us, and meant that:

In the next post, we’ll look at more of the delivery app’s code and learn how Temporal is able to provide us with durable execution. To get notified when it comes out, you can follow us on Twitter or LinkedIn.

If you have any questions, I would be happy to help! Temporal’s mission is helping developers, and I also personally find joy in it 🤗. I’m @lorendsr on Twitter, I answer (and upvote 😄) any StackOverflow questions tagged with temporal-typescript, and am @Loren on the community Slack 💃.

To learn more, I recommend these resources:

Thanks to Jessica West, Brian Hogan, Amelia Mango, and Jim Walker for reading drafts of this post.