From a software development standpoint, Temporal is in the unique position of acting as both a database and a service orchestrator. This duality means that complex stress testing is required to validate the systems ability to sustain performance under high loads. Therefore, a huge part of our stabilization effort involves running high volume stress tests and exercising Temporal in a wide range of conditions. The effort has proved fruitful, as we were able to identify and fix many issues that went unnoticed during small scale deployments. In this post we cover two of the scenarios running against Temporal, provide a high level look at our strategy, and highlight some of the issues we have discovered as a result of testing. 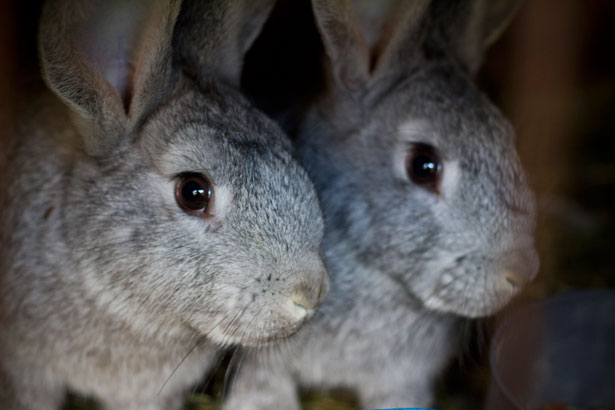 The rabbit scenario aims to generate an exponential burst of load across an entire Temporal cluster. We start with a single Workflow which then spawns Workflow children, each of which spawns more Workflow children, and so on. In addition to load generation, this scenario validates the functionality of various communication mechanisms used between parent Workflows and their Workflow children.

Branch Workflow: A Workflow whose sole purpose is to spawn child Workflows and then wait for all of them to complete before itself completing.

Root branch Workflow: The parent of the Workflow tree from which all descendants are either directly or indirectly spawned. This is the red node depicted in the diagram below. the root branch Workflow only completes when all its direct children have completed.

Leaf Workflows: These represent the Workflows that do not have any children. Unlike root/middle Workflows, whose sole purpose is to start and wait for child Workflows, the leaf Workflow represents arbitrary logic that we want to test at scale (e.g. maybe a few long-running Activities, waiting for a timer, running a side-effect, etc). These are the blue nodes depicted in the diagram below.

Depth: The literal depth of the Workflow tree which is the number of generations that are spawned. By increasing depth, we are able to stress test the Temporal cluster by spawning an exponential number of Workflows. Temporal shards Workflow executions across its nodes by Workflow ID, so this is an excellent way to generate a large burst of load across an entire cluster.

Fan-out: The number of child Workflows that each root and middle Workflow spawns. It can also be thought of as the branching factor of the tree. By scaling fan-out we are able to stress test the ability of Temporal to handle a high number of events for a single Workflow execution. Disclaimer: Temporal’s recommended unit of scale is a Workflow. This means that you are better off spreading load across multiple Workflow executions rather than trying to cram a bunch of operations into a single, large Workflow execution. Nevertheless, a high fan-out validates a Workflow that conducts a lot of work.

The following is an example "rabbit" Workflow tree with a fan-out of 2 and a depth of 2.

Test 1: spawn and wait for completion

In this test we simply spawn the Workflows and wait for them to complete.

We are looking for following to remain true:

In this test, our leaf Workflow is a simple Workflow that completes relatively quickly (i.e. it executes a few Activities sequentially).

Our test performs additional verification by scanning through the entire Workflow tree once the root Workflow is complete and verifies that all descendants have also reported as complete. While technically unnecessary, this validates that the induction behavior we described above is working properly in Temporal.

In the image below, the root Workflow will complete once all its children are completed, and so on:

Once all the leaf Workflows are confirmed to be running, we call Terminate on the root Workflow.

We then look for the following behavior:

Our test performs additional verification by waiting for all Workflows in the Workflow tree to have a "terminated" status.

In the image below, terminating the Root Workflow will cause Temporal to propagate the terminate to all children by default:

Once all the leaf Workflows have been spawned, we call Cancel on the root Workflow and wait for it to report as cancelled. Note that repeated attempts to Cancel the same Workflow will result in an error message indicating that a Cancel request is already in progress, even though the Workflow status still shows as Running.

The expected behavior of Cancel is different than that of Terminate and we look for the following to remain true:

Our test performs additional verification by validating that all Workflows in the Workflow tree have a cancelled status once the root Workflow reports itself as cancelled. While technically unnecessary, this validates the expected behavior.

In the image below, a cancellation has been sent to the Root Workflow. The cancellation is currently in the middle of propagating. Once all of the children have transitioned to the cancelled status, the parent then transitions to cancelled as well. 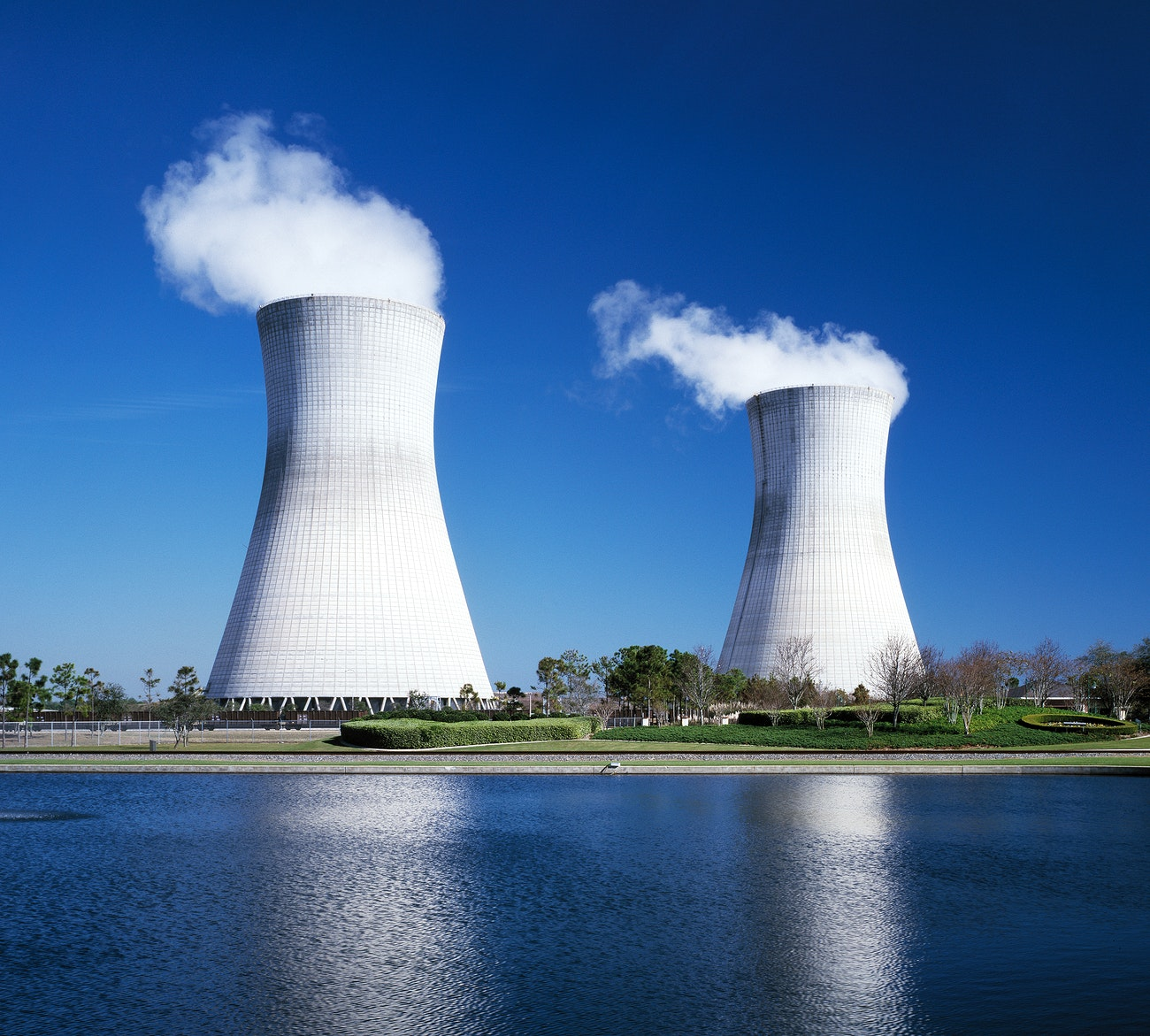 The reactor scenario consists of a large number of long-running Workflows that constantly process external Workflow signals and execute complex business logic. For the purpose of this blog post, imagine that each long-running Workflow instance represents a customer on your platform. This Workflow Instance runs complex business logic each time the customer submits a purchase order (each purchase order is represented as a signal).

While the "rabbit" scenario was focused on generating a large burst of load on the cluster, the "reactor" scenario's goal is to generate a sustained and consistent level of load across the entire cluster. This scenario exercises a wide-variety of Temporal features that are commonly used in the field.

Signals: A Workflow signal provides a mechanism for an external process to send arbitrary data to a Workflow. For example, if a customer submits a purchase order on your website, your backend architecture can construct a "purchase order event" and send it to the Workflow instance associated with that customer. Workflow logic can block on the receipt of a signal (or for a specific amount of time to elapse).

Signal with start - A client can send a signal so that it routes it to a specified Workflow ID, or if no running Workflow exists with that ID, then creates a new Workflow Instance with that ID.

Large replay history - You will notice that we described our Workflow as "long-running." Long-running means that we don't anticipate the Workflow "completing" execution. As a Workflow processes signals and executes Activities, its replay history continuously grows. The longer the replay history, the longer it takes for a Workflow to resume execution in the event the worker that was hosting it either crashes or encounters memory pressure. The Temporal Server has configurable limits on both the number of events and overall storage size of the replay history. Any workflow that exceeds this history is automatically terminated.

Continue as new - In order to avoid the performance and/or termination issues described in the previous section, our "long-running" Workflow periodically completes with a "continue as new" error. A "continue as new" error enables you to start a new run of the same Workflow ID with brand new Workflow inputs, which means that the size of the history of your new instance starts growing from zero again.

Workflow timers - Timers provide a mechanism to tell your Workflow that it should wait for a specific duration of time before proceeding. For example, maybe you introduce a 10-minute artificial delay between sending a purchase order confirmation to the warehouse and then sending a purchase order confirmation to the customer. Or perhaps you are willing to wait for up to 2 days for a purchase order delivery receipt signal to arrive. If the signal arrives within two days, you take no action. If the signal does not arrive within two days, you automatically open a customer support ticket.

A logical representation of what a long-running Customer Order Workflow instance looks like.

Note that there are three activities:

And there are three different types of signals:

This represents Workflow logic that is waiting for an external component to send a signal to the instance.

The "wait for order confirmation" logic either waits for a signal to arrive or 10 minutes to elapse after which it will follow the appropriate path in the Workflow.

We send a large number of purchase order signals to random Workflow instances using the SignalWithStart functionality. These signals are sent at a constant rate over a large period of time (on the order of hours or days). Each purchase order signal is sent to a randomly picked Workflow ID from 1 to N. For example, if we were to send 5 signals to 3 workflow instances (Workflow IDs: 1, 2, 3) at random, then those 5 signals could be sent to Workflows IDs in the following order: 2, 2, 1, 2, 3

A common stress test scenario we run is sending 1,000,000 signals to 10,000 Workflow instances at a constant rate over a period of 10 hours.

The test validation procedure is as follows:

The following picture shows an example of how the test driver periodically queries all the stats aggregation Workflows for counter values until the sum of all the counters hits the desired threshold. 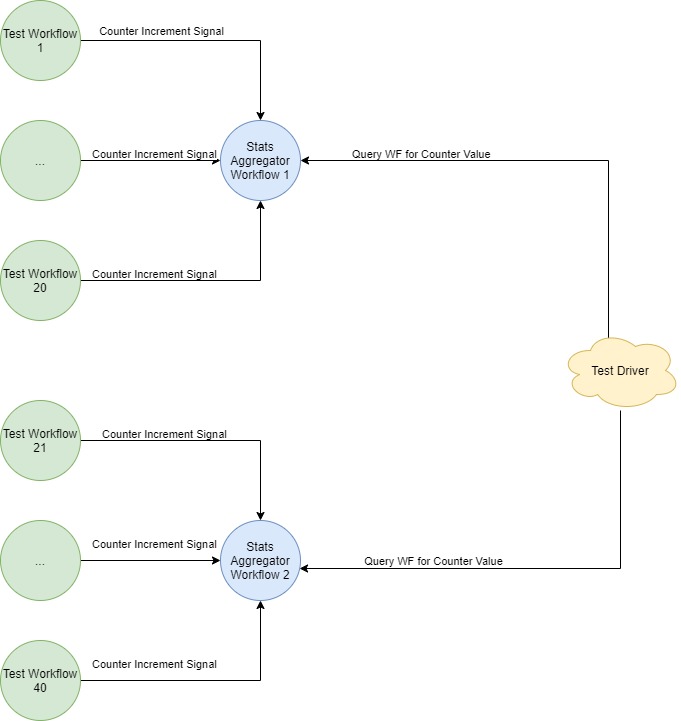 Java SDK testing - All of the stress tests authored up to this point have been written using the Go SDK. There is an ongoing effort to port all of these test scenarios on top of the Java SDK as well. We expect these tests to help us harden the Java SDK and further prove the stability of the Temporal product.

Failure testing - These same stress tests we are authoring can be run against a cluster that is hooked up to fault injection. We’ve written our stress Workflows in a way that we expect them to successfully finish, even in the face of consistent Temporal outages. There is an ongoing effort to create automated pipelines that validate successful test execution in such failure scenarios.

You can expect future blog posts detailing our results and findings for each of the above two efforts as they progress. You can also expect us to have future posts about additional stress tests we are implementing.