This blog post gives some insight into Temporal's strategy for securing our cloud environment. It also calls attention to an unexpected facet of AWS access policies encountered along the way. 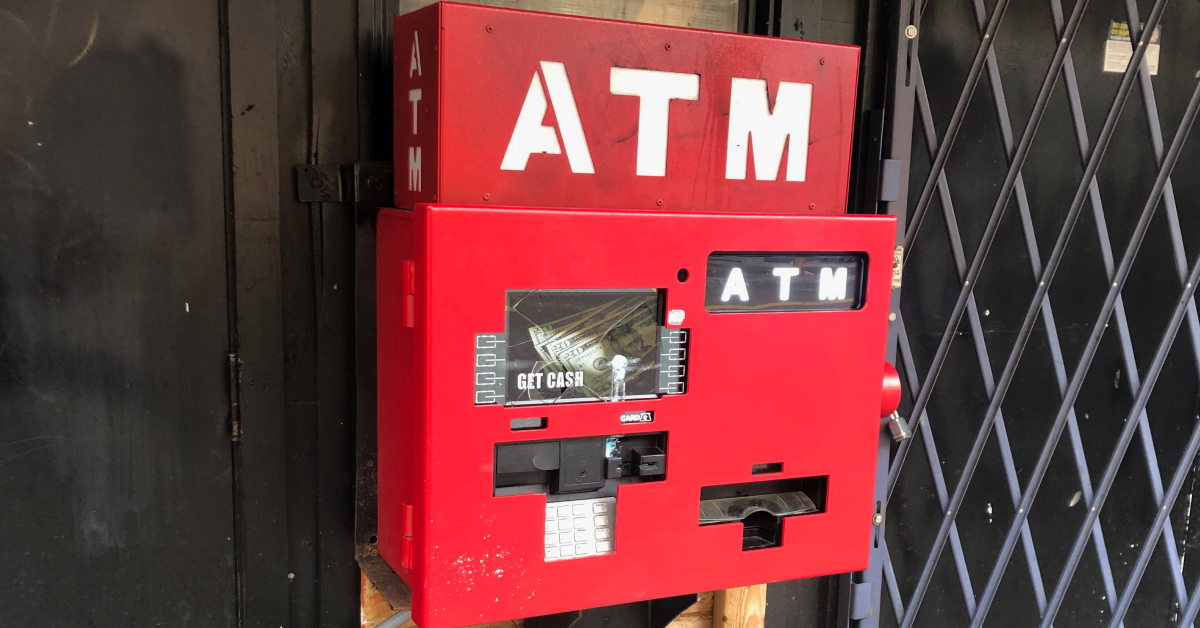 Finally, I'll come around to what I discovered—what I thought I wanted isn't what I needed—and describe what I need.

Our long-term goal is to develop an access-control mechanism that can be flexible, scalable, and secure. After we reviewed various strategies, a Biba-style model of segmenting our AWS accounts seems to be the best fit for us. Each account forms a hard ¹ "perimeter" and provides an easy way to set, measure, and maintain the maximum "blast radius" of each account. If we assume an account has been breached, what is the maximum extent of damage an attacker can inflict?

Setting up numerous smaller accounts can constrain possible damage, but this approach makes our management infrastructure a more compelling target. Configuring only one management account to allow those with access to assume roles into all other accounts greatly expands the blast radius in the event of a breach. Clearly, this is not ideal.

Think of these as Ring 0: interacting with the infrastructure of these accounts in any way should be a big event.² The next ring of accounts, Ring 1, will only listen to commands from Ring 0 and issue commands to Ring 2. Similarly, our core accounts—those Ring 0 and Ring 1 accounts—should not be able to read the data in those outer rings.

It's easy enough to describe this approach, but promises are meaningful only if you follow through with them! The first step for me was to codify this concept into our AWS service control policies (SCPs). SCPs are extremely powerful tools because they apply to all principals within an AWS account, including the all-powerful root user. Effective SCP layout and implementation is critical to a well-secured AWS environment.

Before SCPs became available, all AWS Identity Access Management (IAM) functioned via discretionary access control. There was no way to restrict the actions of an AWS account. Controlling the permissions of subsections of an AWS account has been possible since the release of AWS IAM, but these were entirely the user's responsibility to put in place—and it was impossible to mandate that some actions always be denied.³ With privilege escalation readily usable—for either legitimate or malicious purposes—within an account, it remains unwise to rely on a single AWS account.

When SCPs were released, AWS IAM gained the ability to set mandatory access controls. An SCP applied to anything and everything in the AWS account, including the root user. It doesn't matter if the permissions are allowed within the account—SCPs are more powerful.

To escalate permissions within an AWS account, an attacker must first break into another AWS account and take actions to enable their attack on the initial target. AWS CloudTrail logs an event any time a user encounters an "Access denied" message due to SCPs, and CloudTrail can also log actions such as moving accounts between OUs and adding, removing, or modifying SCPs for an OU or account. In short, breaking into an AWS account this way requires a series of steps that are much noisier–and therefore more easily monitored.

How Mandatory are SCPs?

We have a group of AWS accounts. Some accounts need the ability to assume a role into a separate group of accounts to perform infrastructure/maintenance/control tasks.

We have the ability to mandate what an account is able to do. All that I need to do is mandate that our accounts operate in this manner. We will have our rings of AWS accounts, and AWS will handle the enforcement of what a principal can do. This is how AWS recommends SCPs be used, as guardrails around an account.⁴

I wasn't worried about the positive case: granting the permissions of one account to assume-role into another. Instead, I wanted to test the negative case: disallowing any principal except for a particular role in an account in the correct ring to assume-role.⁵

I reached for the tool that I assumed would be the right one: an SCP with conditionals.

My understanding was that this SCP would disallow the role in this account (creatively named TestAssumedRole) from being assumed, unless the Principal performing the AssumeRole API call had a key/value tag pairing of "AssumeRole/OK". The initial test was successful. But when I removed the tag from the role doing the assumption ... it still worked.

Surprising, right? Well, maybe not. IAM is complicated. My initial assumption was that I had somehow screwed up the Condition section. This is a common occurrence. If you haven't messed up an IAM policy yet, you will. My next step was to apply an SCP that denied all API calls.

If you're struggling with permissions in AWS, check CloudTrail. From the CloudTrail record, it's possible to infer what conditionals might be useful or what underlying API calls need to be allowed or disallowed.

You had one job, SCP—don't let anything happen. Yet, this happened:

Even with an SCP that denies everything, the AssumeRole API call succeeds and returns valid credentials. This is visible in the CloudTrail logs for the account; amongst a sea of Permission Denied errors is one successful API call: the one to AssumeRole. 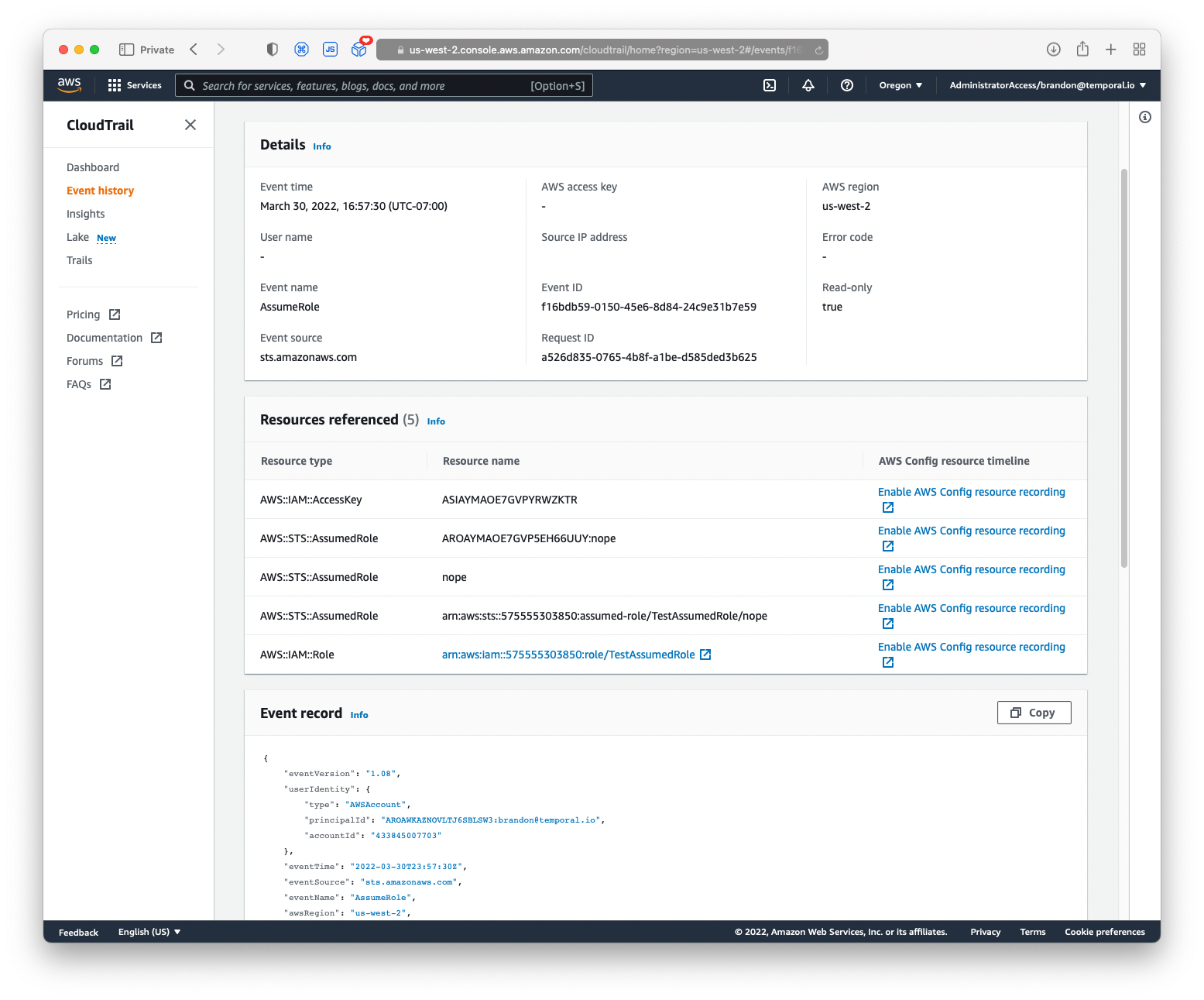 I contacted AWS Security. After some initial confusion, I was helped to understand where IAM in practice and my understanding of IAM differed.⁶ My mental model was that SCPs applied to an account, and even the root user cannot override an SCP's grants. This is true, but put on a lawyer-hat and read that again. "SCPs applied to an account" is true in a very, very literal sense.⁷ Another lesson: Not everything that shows up in CloudTrail has passed through the permission matrix that decides whether an action is successful.

To be extremely clear, it is a good thing that AssumeRole calls made against an AWS account are logged, regardless of source. It's a subtle nuance worth knowing.

Now, let's go back to the limitation of SCPs.

Initially, the SCP didn't seem to be working. As it turns out, this is by design. Technically, everything is working as it should. This surprised me, and I set out writing this post to help other people know about the times when SCPs don't apply.

You see, an SCP is applied to all principals in the account it is applied to. An SCP does not impact principals outside of the account. The initial, tagged, role exists in an account unencumbered by an SCP and therefore had no restrictions on assuming roles. Meanwhile, the credentials returned by the assume-role API call were encumbered by the SCP and thus could not do anything.

With this understanding, it makes sense. An IAM role in a different account is not encumbered by this SCP and therefore will not have the sts:AssumeRole call blocked. But when a principal that is subject to the SCP tries to take an action, it will be blocked.

There are currently no easy workarounds. The Assume Role Policy Document (ARPD) can be constantly updated to maintain a listing of AWS accounts allowed to assume the role the ARPD is attached to, but modification to the ARPD comes from inside the account. We are back to the early days of IAM, when mandatory access controls were unavailable. It is possible to constantly, exhaustingly, manage this by assuming roles into an account and updating the ARPD attached to various IAM roles, but there is no dynamic way to prevent an account from listening to anyone except those who are trusted. Although it is certainly possible to use an SCP to prevent updates to an IAM role by applying a Deny policy, that is only a partial solution—and it still doesn't solve the problem. It can even generate more problems because the permissions needed to prevent malicious ARPD updates are also needed to create service-linked roles, maintain existing IAM roles, or even to remove unknown accounts trusted by the ARPD.

Even if I spent the time and energy to build (and test) a system to keep everything updated, and it was automated, and I could define/tag various accounts and specify who is allowed to access them, and AWS IAM enforced that for me, I'll still have a problem: vendors.

Really, what I want is an official way to know who owns an AWS account. Scott Piper runs the "well known AWS" text file, but I could just edit it to claim an account number.[9] There's no formal verification here. Further, absence of an entry in this file is no indication either way of the trustworthiness of the account. AWS should be providing that capability so that vendors can give out trusted account numbers for me to verify before establishing that IAM role can assume an IAM role in my account.

There are implications even beyond simple IAM roles. For example: How can a Temporal customer know, if they want that from a trustworthy source. The actual item today is called the "Assume Role Policy Document," and that is very literally true. But we (as a community) have been calling it a Trust Relationship or Trust Policy for so long we've blurred the lines too much.[10] Having an ARPD is fine, but I as an operator of the system need to:

That's hard work, but I'm not afraid of hard work. However, what I really need is a way to verify that an account number is actually who I think it is, instead of trusting documentation. AWS should provide a verified account number service.

My end goal is the same as when I started: to define the trust relationship from one account to another. But currently, all I have is an ARPD, and it is up to me to manually calculate that trust relationship. I would like AWS to handle some of that for me, to make it easier for me to know who I can trust (and then apply those trust relationships across all of Temporal's accounts!).